By Luke Edwards / District School Board of Niagara

Character development helps students understand how to become a somebody

PORT COLBORNE — Grade 2 and 3 students in Lorraine Forand’s class at Dewitt Carter Public School have turned a nobody, into a somebody, and in the process learned what it means to give back.

A couple months ago the class arrived to school and saw a suitcase sitting in the middle of the class. Inside the suitcase was a doll. The doll was genderless, nameless, without ethnicity, skills, or personality.

It was the job of the students to turn it into somebody.

“We each added one object to Nobody to help it become Somebody,” said Brianna Buchanan, one of the students in the class. 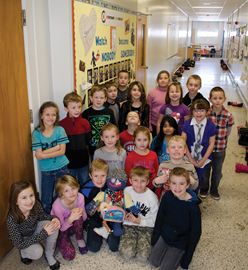 Becoming a somebody
LUKE EDWARDS/STAFF PHOTO
Students at Dewitt Carter Public School recently learned how to give back with a unique program called Who Is Nobody? The students turned a doll called Nobody into Somebody.

The project Who Is Nobody? Was created by former teacher Kelly Clark. It came to Dewitte Carter PS through Mauryah Burattini, a Brock University student currently going through teacher’s college. She heard Clark speak at Brock and when she came to Dewitt Carter for her practicum decided to bring Nobody with her.

Each week a student took Nobody home with them. Each student had to do something to turn it into Somebody. Some added eyes or other facial features, others added clothes.

But each item a student added had to relate to something they did to help people, animals or the environment.

“The kids got to choose the project,” said Burattini. “There were unique projects that showed what they were passionate about.”

The projects ranged from Buchanan putting a mouth on Nobody and spending the week teaching people how to talk kindly to friends and strangers,to Ethan Molna, who used a poppy to form one of Nobody’s eyes. Ethan had the doll during Remembrance Day, and taught the students about the importance of remembering Canada’s soldiers and those who fought for our freedom.

Some students donated to Goodwill, some built shelters for animals, other picked up garbage and recycled.

Burattini said the program was a great way to teach character development and give back to the community.

It wrapped up this week with Nobody having become a full Somebody.

For more information on the project visit www.whoisnobody.com.

Where would you most like to focus your own character development? Think of the attribute important to you (empathy, courage, initiative, etc.)

Have you seen a movie that highlighted character development through the actor’s choices?

What activities help you with character development?

About the Author: Who Is NOBODY?

Who Is NOBODY? is a literacy-based bullying prevention program for Grades 1 – 12 that applies the curriculum to real-life experiences. Students build self-esteem by discovering their strengths and using them to help others.

This site uses Akismet to reduce spam. Learn how your comment data is processed.

My Tweets
As Featured On