Kids make somebody out of Nobody doll

By Mike Zettel / District School Board of Niagara

It came in the form of a box resembling a well-travelled piece of luggage. On it was a cryptic message: To Everybody. From Nobody.

I am so impressed at how flexible the program is— Jennifer Jinks, teacher

If that wasn’t intriguing enough, inside was something which got the Grade 4 to 6 kids’ creative juices flowing.

It was Nobody, a blue denim doll. He (or she) had no name, no personality and no interests, and it was up to the students to provide them, to turn Nobody into somebody.

The students do this by taking on research projects. Given freedom to choose what interests them, the students are asked to pick from the categories of people, animals or the environment.

Along with learning about their subject on their own and presenting their findings to their class, the students find ways to make a difference through volunteering or fundraising.

It brings in excitement, they love that they are doing such good, that they’re teaching Nobody— Jennifer Jinks, teacher

Kaitlin said it is the most common genetic disorder but is not fatal, which is why most people have never heard of it. In her sister, it results in the appearance of spots, known as cafe-au-lait macules, as well as behavioural problems.

“Not many people are familiar with it, so I wanted more people to be aware of it,” she said.

Kaitlin said even she learned a few things she didn’t know and has a better appreciation of what her sister is going through.

“Sometimes when she does something, she doesn’t know why she’s doing it,” she said. “It helps me to understand her more.”

To cap off the project, Kaitlin pinned a daisy, the official NF flower, to Nobody’s chest.

There’s such a variety in what the kids have done— Jennifer Jinks, teacher

Nobody has a few other three-dimensional attachments, including animal ears and a bracelet — all related to kids’ projects and all added to give the doll character.

Character education teacher Jennifer Jinks said she was impressed by how flexible the program was.

After watching three short instructional programs on a DVD, the kids were free to learn about what they wanted.

“There’s such a variety in what the kids have done,” she said, explaining one did a presentation on an animal rescue group, while another did one on an orphanage in Tanzania for which a local 19-year-old woman is an active volunteer. 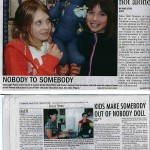 While she could have assigned the projects without the doll, there is just something about Nobody which really gets the kids motivated, Jinks said.

“It brings in excitement,” she said. “They love that they are doing such good, that they’re teaching Nobody.”

Nobody was created by Toronto teacher Kelly Clark, who grew up in Niagara and said she wanted to find non-superficial interests for her students to focus their energy on instead of simply the latest toys, electronics or clothes.

The program has been in classrooms for three years and is supported by the Rotary Club, which donated thousands to schools across Ontario.

Camryn Asham, a Grade 5 student at Connaught School, and Kaitlin Blanchfield, in Grade 6 work with Nobody, a genderless, ageless, nameless doll that they and their classmates are turning into a somebody through various philanthropic and educational acts.

About the Author: Who Is NOBODY?

Who Is NOBODY? is a literacy-based bullying prevention program for Grades 1 – 12 that applies the curriculum to real-life experiences. Students build self-esteem by discovering their strengths and using them to help others.

This site uses Akismet to reduce spam. Learn how your comment data is processed.

My Tweets
As Featured On